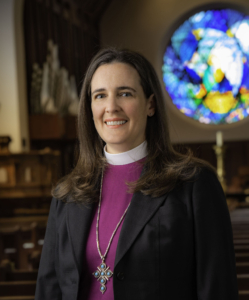 Bishop of Arizona
The Rt. Rev. Jennifer A. Reddall
bishopreddall@azdiocese.org

Jennifer A. Reddall was elected the Sixth Bishop of Arizona on October 20, 2018 at All Saints’ Episcopal Church in Phoenix. She was consecrated at Church for the Nations in Phoenix, on March 9, 2019 and was seated on April 7, 2019 at Trinity Episcopal Cathedral.

Bishop Reddall, who was previously the Rector of the Church of the Epiphany in New York City, believes the world is hungering for Good News, and that the “Episcopal branch of the Jesus Movement” has a compelling message of joy, love, and justice to share. At their best, our churches welcome all and seek to build communities where newcomers and established parishioners alike can grow their faith, experience the love of God and neighbor, and claim their identity as disciples and ministers of the Gospel.

At Epiphany, she led a diverse congregation in growth, particularly among new families with children. She began as Associate Rector in 2003, became Priest-in-Charge in 2011, and Rector in 2014. She successfully restructured their Day School, completed a major building project, and led the creation of new local and international outreach ministries.

Bishop Reddall grew up in California, and after graduating from Yale University with a degree in Theater Studies, she joined the Episcopal Urban Intern Program in Los Angeles. She graduated from the General Theological Seminary with an MDiv in 2002. Her first ordained role was as the Curate at the Church of the Epiphany in Agoura Hills, a large suburban parish outside Los Angeles.

She was a Trustee of the Diocese of New York, a former chair of the Diocesan Liturgical Commission, and a member of the Organizing Committee of the New York Episcopal Credit Union. She served on the Institutional Review Board at Weill-Cornell Medical College for over ten years, and was appointed to serve on the House of Deputies Subcommittee for Truth and Reconciliation in Sexual Harassment and Exploitation.

Bishop Reddall has one son, Nathan.